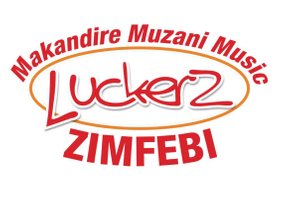 Albums information & The music: Brings out the current issues in our current Zimbabwe tradition. We wish to present different perspectives of people of Zimbabwe through music, our culture is transmitted and discussed. We like to share with the audience. 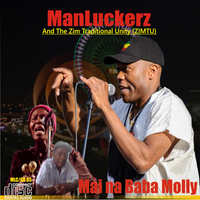 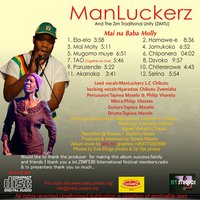 ManLuckerz has launched his fifth album on all internet music shops/ channels. It is about gratitude to ManLuckerz parents; for all that they have helped in life today. With the album he want to show appreciation and to thank the friends who helped after the accident that occurred last year, 10 August 2014. All current estimates are included on the disc. According to his opinion, TAO (Together As One) & Jamukoko and all other highly topical songs, then the matter of xenophobia, discrimination, corruption and gender balance between people. It describes a lot of emotions from what happened in the accident both positive and unfortunate thing that today has followed in life. Do not miss our gigs!

Mai NaBaba Molly- An appreciation song to my parents.

MUSIC AND DANCE: THE ZIMBABWEAN EXPERIENCE

1) THE ROLE OF MUSIC IN AFRICAN CULTURE:

In African culture, music plays many roles. Music accompanies the life of an African from birth to the grave. The following are some of the events that are marked by music and dance:

a) Baby welcome and naming ceremonies where the child is introduced to the outside world and given a name.

b) Initiation ceremonies, such as circumcision amongst the Varemba people of Zimbabwe.

c) Rituals and sacrifices. Religious activities among the Shona are accompanied by music.

d) Death and funeral. There are songs of lamenation and mourning.

e) Working songs, such as Sevenza nhamo ichauya. In the traditional Shona society they had a communal approach and different households came together for planting, harvesting, threshing, accompanied with singing, etc.

g) Protest songs for complaining about those in authority.

a) Trumpets and horns (Hwamanda, Nyere)

made by Tute W. Chigamba in Zimbabwe

The influence of Christianity and colonialism has seen the adoption of Western instruments.

Drums are very important in the traditional dances of the people of Zimbabwe. Some of the drums are tall (mutandarikwa) and can only be played while standing. These tall drums are especially found among the Karanga people of Southern Zimbabwe. They were played for the Shangara dances. Drums had a lot of social significance among the community. They served several purposes. These include:

b) Sending signals or messages associated with an approaching army

It is crucial to remember that the Shona people were/are an oral community. Writing as a means of communication is a recent experience. In the traditional context, much of the communication took place through oral strategies. The drum was an effective communication instrument in the pre-colonial days. Women were however not allowed to play drums, particularly the small one that is tucked between the legs for practical purposes. Ritually, menstruating women were excluded from participating in ancestral issues.

Shona music is both recreational and ceremonial. In recreational music, people utilize music for leisure. They used it to relax and enjoy themselves. Ceremonial music has to do with the worship of the ancestral spirits. While the Shona people of Zimbabwe believe in One Creator God, Mwari, they also believe that the ancestral spirits are mediators between God and the people. Regular ceremonies are held where beer is dedicated to the ancestors. Music and Dance characterize such gathering that may take several days.

When discussing the importance of traditional dances among the Shona people of Zimbabwe, it is critical that we remember that the term ´´Shona`` is an umbrella concept for related ethnic groups in the country. While they speak related dialects and have hade common historical experiences, they are also marked by salient culture differences. The Karanga, Zezuru, Manyika, Korekore, Budya, and Ndau communities generally make up the Shona people of Zimbabwe. It is the largest ethnic group, together with the Ndebele making up about 98% of the indigenous population of the country.

Geographical distribution is as follows: Korekore in northern Zimbabwe, Zezuru in the central region, the Karanga in the south-central area, the Manyika in the central eastern part, and the Ndau in the southeastern part. Various dance routines have developed in the different linguistic and cultural areas.

However, with urbanization and greater movement of ideas and practices in the postcolonial period, many of the dances are now common to the different parts of the country. A good example is how the mbira musical instrument that was confined to central and northern areas is now played across the country.

Why has dance been important to the various cultural groups found in the country? For the African, musical sound is rather incomplete if it is not accompanied by some movement. Dancing is a useful way through which the community releases emotions. The frustrations of life, its joys, and sorrows, all find expression in music and dance. But the dances also have deeper significance.

They are used to convey feelings of friendship, hostility, and many others. The dances of Zimbabwe reflect the peoples' response to the environment.

-To contribute to national and international development by promoting the performing arts as a viable industry for example: to train as many children and adults as possible.

-To break the circle of poverty by implementing new ideas amongst ourselves.

-To raise the necessary financial resource of self-reliance.

-To create awareness amongst young people to let them fulfill their capacity to contribute to the development of harmony.

-To promote Zimbabwe traditional music in the society through undertaking activities which include the community a large and worldwide.

-To encourage artists to organize themselves and to exercise newly acquired skills co-operating for the improvement of ourselves and society.

-To entertain, educate and inform audience.

With royals, promises, mineral that creates energy and gives us faith and hope in the future and freedom that leads to independence.

What Makandire Muzani Music logo stands for: The minerals symbolize ManLuckerz roots and his background, thanks to his roots that inspired him to create traditional music in the world. Creativity, space, air-space to create music from his inner truth, hope, purity, safety, comfort.

MM-Music is a new life that is about to be born, blood = the power of the blood, blood ties are connected to his ancestors Makandire-Muzani who have influenced him and led to the man he is today, the combination of heat and sun symbolizes Africa connector between people.

Makandire Muzani ZIMFEBI Music is registered culture organization under the cultural developments in the world. It is there to bring

cultures together from different corners of the world, e.x. Sweden, Zimbabwe.  MM ZIMFEBI Music is affiliated with many different organizations such as ZIMFEBI, Makandire-Ariane Together As One (TAO) Inter-Cultural Promotion, ZiMoSwe, Bistro-Hijazz, Sensus, Kulturfyren, etc. 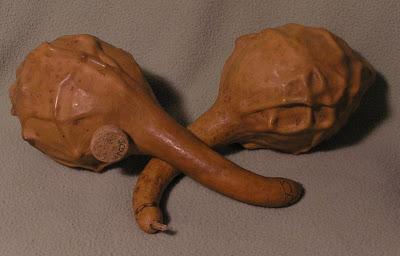 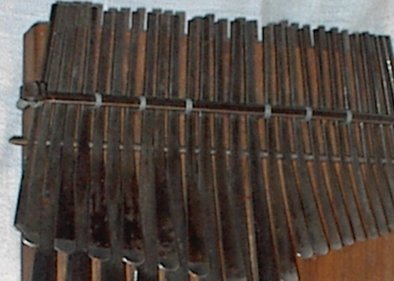